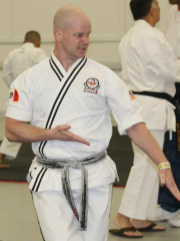 Hobbies: Running, working out, and most things martial arts related

Favorite Food: Tacos & Sushi (Not together)

Favorite Martial Arts Saying: “The ultimate aim of the art of Karate lies not in victory nor defeat, but in the perfection of the character of its participants” ~ Funakoshi Gichin